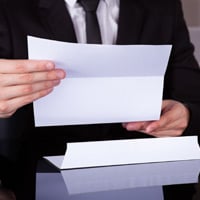 Directors have been told that they now have only four months to save their company from being struck-off from the Companies House Register if they do not reply to formal letters from registrars.

In a warning to directors, Companies House has said that those who are late in filing their company accounts, and don’t reply to formal letters to comply will be struck-off the register and will subsequently cease to exist.

This procedure is set out in Companies Act 2006, Section 1000 and requires the Companies Registrar to send at least two formal letters to the company.

If no reply is received to either letter, then the registrar can take the decision to publish a notice in the Gazette to inform the world that the company will be struck off three months from the date of the notice.

This process used to take around six months to complete, but now it has been revised to only take four months. This is as a result of a shortening of the periods between sending the formal warning letters from a month to 14 days, and the notice period in the Gazette has been reduced from three months to two.

These changes were made by the Small Business, Enterprise and Employment Act 2015, Section 103 with effect from 10 October 2015 and yet many businesses are still not aware of them.

Accountants have been told that Companies House has changed its internal practices to start the process of removing a company from the register much sooner than was otherwise the case to reflect this change in legislation.